Out with the old…

Last night I drove down to Wilmington, just south of my home, where my first studio resided from early 2007 until this past December.  Wilmington, as you may already know, was the former home of all things Marmalade (well if you came out to my studio anyway!) for almost five years.  The #1 reason Wilmington attracted my eye in the first place was because of an amazing old building, a delapidated train depot built in the 1860’s.  The depot stood majestic, beautiful, aged, glorious, despite being shuttered up with mismatched plywood boards, its’ facade crumbling in pieces to touch for anyone who dared near it.

For me the depot was nothing but perfection.  While I discovered the depot long ago, I rediscovered it for photography purposes in 2005 when I started scouring locations for my newly birthed professional children’s photography business.

During the long days of summer, before I moved Marmalade Photography out there, you could find me and my (mostly) compliant (but often resistant) children at the depot stopping for some time in the shade of the brick building, photographing mini sessions together.  In my dreams, dreams I had only shared with my husband during this time, I had this SOMEDAY dream that maybe I would hit the jackpot with the lottery and be able to purchase this building for my very own studio purposes.  Was it illusions of grandeur?  Perhaps.  In my naive mind, the thoughts of a dreamer, it was completely attainable (no matter how prohibitive the cost!)  I had huge plans for this old, decaying brick structure.  I’d figure out a way to keep the old and bring it in with the new.  It would be mine.  I was mostly convinced of this.

That never came to pass and instead I moved my business into the North Water Street area of downtown Wilmington in early 2007.   I drove by that old depot regularly, it became the beacon to entering work mode for me.  The sight of the old building never failed to make me smile and dream of the “what if…” aspect of it.   In May 2007. upon almost completion of studio fix up, I had my first session out of the studio (I’ll include photos below).  This was a vintage themed session, something not seen often at the time (now very ubiquitous in our little photo world).  It was vintage not because of my vision but because the mom of the girls was SO into the historical aspect of where my studio was located (aided by my waxing poetically ad nauseum during our client intake process) that she brought all these AMAZING vintage props and we had a blast going from location to location in my old beat up town.  Of course our session together wasn’t complete without taking the girls to the old train depot up the street.

Through the almost five years that Marmalade Photography resided in Wilmington I used the train depot more often than I could count.  I used it for the amazing session with triplets that had me laughing the whole time, the shoot with the family with four brothers, some of my favorite people were photographed there by yours truly, I used it at workshops and mentorship programs with other photographers, I took my kids there, I continued to dream as I drove by it, clients always remarked at how awesome that old building was.  Without doubt it was an iconic building.  With its’ crumbling red brick exterior, covered with peeling old (probably lead!) paint and fluorescence, shoddy old roof, boarded up windows, occasionally open door to the bottom level where vandals and curiosity seeking types would break in to check out this formerly majestic site.

Some brilliant soul has done a YouTube video of my former friend, she really aged in the past year and it’s clearly evident why they had to do away with her.  Sadness fills my heart when I view it because her former glory is still evident behind her sagging exterior:

Sadly my dream is now ended.  I had to drive to Wilmington last night for an away volleyball game for my daughter.   I anticipated my usual excitement (and braced myself for that bit of sadness that was to be expected after leaving a beloved place that was a home).  As I drove up Kankakee Street towards the railroad tracks I immediately noticed the pile of rubble that took the place of my familiar old friend. All these years the familiar  that greeted my entry into the downtown area was GONE.  I was in shock.  Utter shock and disbelief.   I had no idea that this demolition was planned far in advance, to my knowledge there were still plans to move this structure somewhere else in town.  Imagine my disappointment that progress killed my beloved building.  Video killed the radio star.  High speed commuter train service killed my 1860’sish friend.

With that I bid adieu and am including a random sampling of photos taken over the years there.  It seems to be a fitting end to five great years in this amazing and sometimes comical old town.  Leading off with images of my first client session at the depot – here is a small sampling of work we created together: 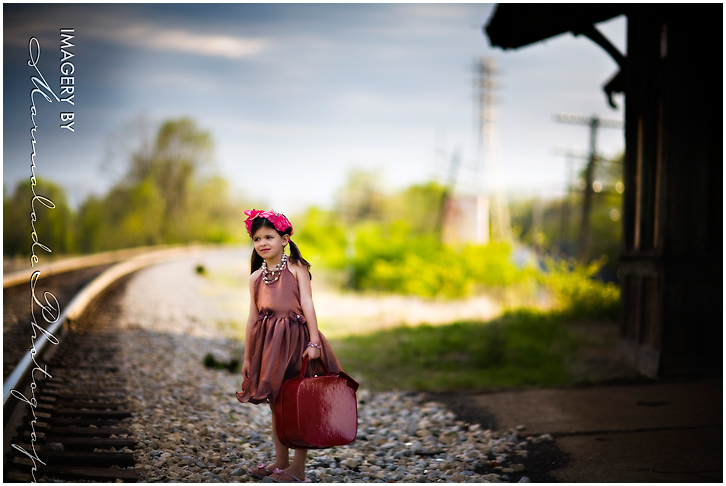 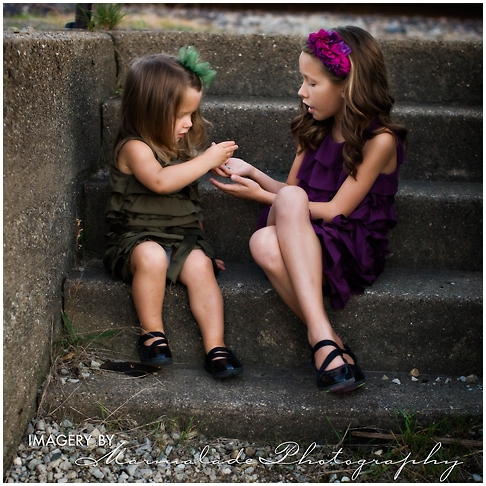 Oh I forgot to mention one last tidbit about my move out of Wilmington.  It seemed as if the universe spoke to me that everything would be all right, a confirmation that yes, I was making the right move at the right time leaving my Wilmington space.  It happened that on my last day, the day I was handing over my keys to my landlord, Charles,  a letter arrived from my friend and former workshop attendee and mentee Stefan.  In it was this great photo of my two girls at the train depot from 2008, it was my last piece of mail in Wilmington.  Given that this studio is no longer mine and this train depot is no longer Wilmington’s – it was a fitting end to an amazing run.  Goodbye old friend, thank you for helping me create beauty and art for so many grateful and wonderful families and for me.