I had the pleasure of working with K family this evening.  It was gorgeous out, warm enough for a great session outdoors with summer dresses on.  After a very weird spring where it never felt like it was going to warm up this evening was a nice break into the warm weather.  And the clothes that Galina brought for the session for the girls just tickled me.  Sundresses and fun capris (with rhinestones on the camouflage…I fell in love).  The girls were adorable, Miss B and her sister Miss M were curly haired cuties and I think the camera really loved ’em.

Thanks to their mom & dad for driving out from Lincolnshire for a Marmalade Location session (we did 3 mini locations, those girls were good to us letting us shuffle from place to place).  Enjoy the little sneak peek of your cuties!! 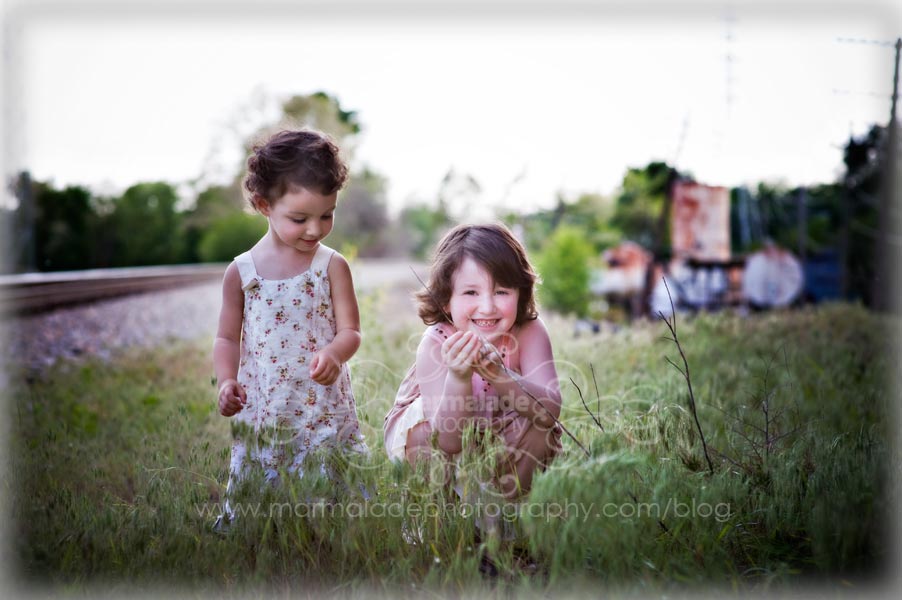 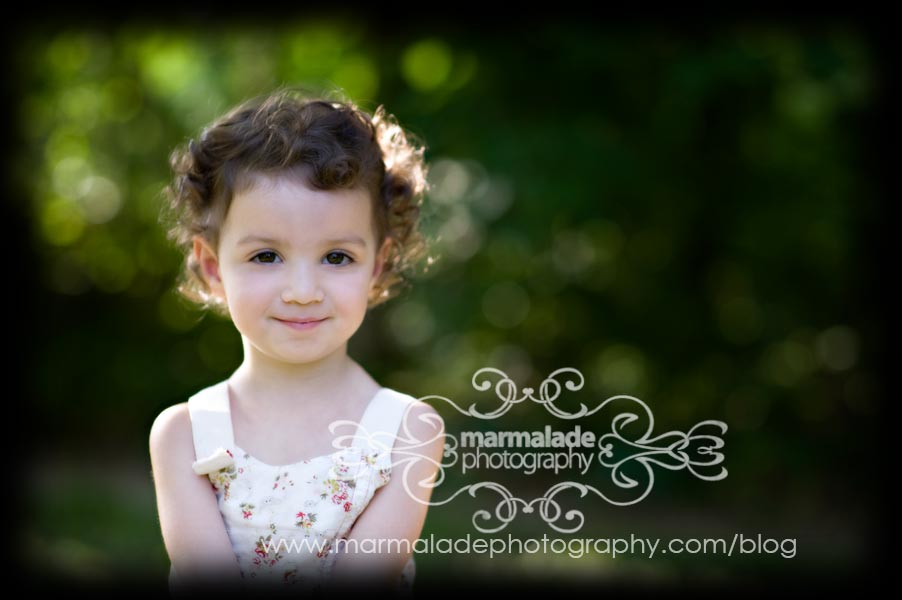 I love the look on her face.  You totally had to be there to get why.  LOL 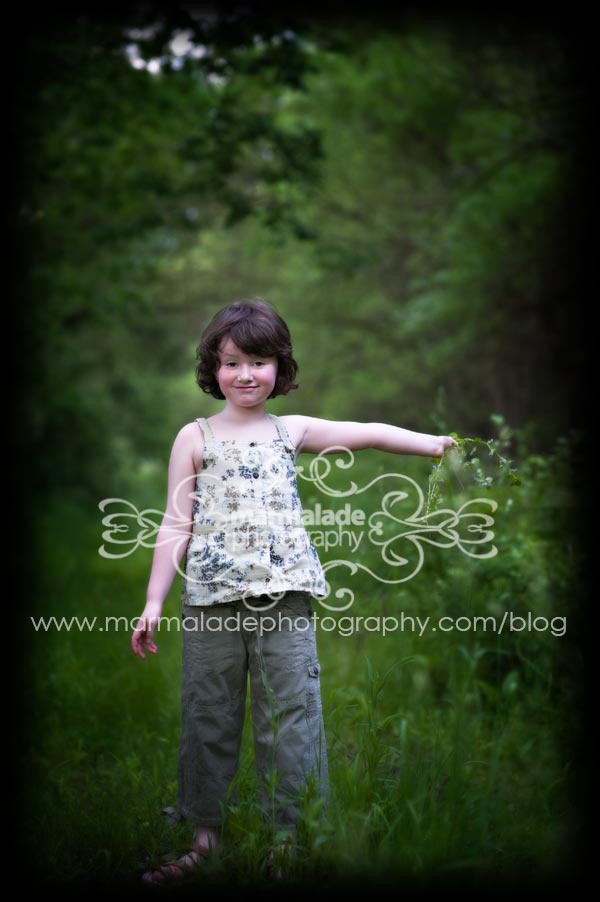 Thanks for stopping in.  Have a good one!

I had the pleasure of photographing the very beautiful K family yesterday evening.  They drove all the way from up north (like Lake County north 🙂 ) to hang out and have a session with me.  It is always humbling to know that people are willing to drive distances to come hang out with me and get images out in the vast mostly untouched nature that is my outdoor studio.  A big thanks to Agnes & Jeff for allowing me to capture their beautiful kids, O&K at this beautiful time in their lives.

So…a sneak peek for them (& eyecandy no doubt!).  Look below for something fun as well.

Now for something different.  Chloe is the wonderful new addition to the antique store across the way from me, Antiques On Water Street (definitely worth a stop if you are in the Wilmington/Rt. 66 neighborhood!).  Isn’t she beautiful?

There is more but I haven’t gotten done playing with them.  I just love little Chloe.

Thanks for stopping in.  Namaste.

Several months ago when Polaroid announced that it would be pulling out of the instant film market that it created (a sad day for niche hobbyists everywhere) I started searching through the many boxes that are stored in our basement for my old One Step camera.  My goal is to snap pics of everyday life with the old skool instant gratification that encompassed the entire decade of the 70’s (in my mind anyway?) !  What is more synonymous with the 70’s than the many old polaroids people have.  The muted tones of the now defunct (and fabled) SX-70 film contain more memories all over the world than I could possibly imagine.

So, with Polaroid pulling out of the instant film market (no more shaking it like a Polaroid pic-turrre!) it’s time to stock up.  Several weeks ago I ran across my L.A. photographer friend, Angela Calderon’s blog and she was buying 600 Film up like it was going out of style (um, wait a sec…)  😉  I have a ton stockpiled in various internet shopping carts but worry that I’m participating in a mass hysteria feeding frenzy for a product that altho is much beloved doesn’t necessarily produce portrait quality images (not on the level of what I’m used to with my equipment that costs as much as thousands of old One Step cameras).

It may not be high art but nonetheless some memories are left better muted and slightly out of focus.  One of my most cherished of images (and quality wise it sort of sucks) that Polaroid has captured for my own family is of my newborn Lauren.  When I was in the hospital in 2001 after she was born and suffered unforeseen circumstances I was unable to see/hold her in the first few days of her life, the RNs in the nursery snapped a Polaroid pic for me that was taped to the bedrail on my bed in ICU:

Without this picture there for the several days I spent away from her (completely away from her) I may have not recovered from my own circumstances as well.  I remember gazing at her sweet face and willing myself to get out of bed and just get better.  So although I never had thought about it much before, Polaroid had a hand in keeping me on the path to stick around and be a mom for my two girls….however small the hand was, Polaroid images have been part of my life and probably will continue (until my stockpiles of film run out).

I finally FINALLY dug out my old One Step camera last night.  I was on the phone with a good friend from h.s. who I had lost touch with in the past 10 years or so and I shouted into the phone YEHHAW!!  Poor woman on the other line may have thought I lost it, getting giddy over a camera so readily found on eBay for pennies on the dollar but I was excited!  TIme to break out the stockpiles and get a little retro artsy with my found object.   Now if I could only find the ole Holga I’d be in business….

In the spirit of Polaroid, I present this next little YouTube clip.  THIS is amazing, a must watch for my Polaroi-holics out there (and even those of you who may not be):

Can be SO SO very fun.  Especially when everyone involved is totally  into it.

Meet (once again) E&S, two of the cutest babies this side of Chicago.  I am telling you, E is a huge flirt and S just knows she is IT.  So stinking adorable, I could’ve taken them home for my own (luckily I didn’t otherwise I’d be writing this from the Will County jailhouse!)

A big huge thanks to Lisa & Ed who brought the kidlets out to the studio for urban studio stuff and then willing to haul my new blue velvet chair to the new location to do some fun sky stuff.  I have enjoyed working with you guys so much over the course of the last two baby plan sessions, you guys are so very awesome.  Up for anything.  Ed, I now hereby decree you Chair King.  LOL.

and finally, my nod to the great Dave Hill (whose work has inspired me for years now and finally I am understanding some of the methods…)

I am so happy with this session.  Can you hear how giddy I am?

Now for something different:

Where Will Life Take You?

One of my most beloved small movies is actually a commercial.  I have several in fact (all advertisements, however subtle they may be, produced to be viral pieces of beauty or humor filled to spread the buzz of the brand they signify)…this is my ‘beauty’ favorite.  Stay tuned til the end to see the real deal of the WHY this is.